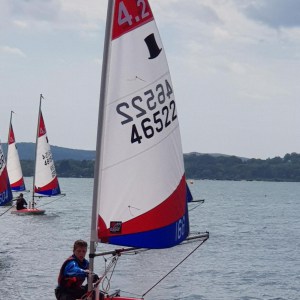 Year 6 pupil Joe R has been selected for the Topper 4.2 National Sailing Squad for the 2019/20 season.  These national squads are aimed at supporting young British sailors between the ages of 11 and 16, to enable them to develop their racing talent and progress onto Olympic class sailing boats.  Joe has had to compete in various qualifying events over the last 6 months to be considered for the squad, which is open to sailors aged 11 to 13 years.  Joe has been recognised despite still being 10 years old.

He also gained selection for the South West Regional Topper 5.3 Zone Squad but has decided to commit to just the National Squad for the year.  He placed first, third and fourth place overall in the 3 qualifying National Series Regattas in Poole, Datchet Water and Plymouth Sound.  The squad involves 5 training weekends through the winter months, along with six National Series Regattas in the summer. He aims to go to the Worlds Topper Championship 2020, which is being held in Italy next year.