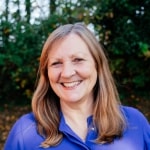 Hilary Thomas has enjoyed a relationship with St Peter’s for over 20 years, initially as a parent then in later years as a valued member of staff.

In her final weeks with us and as she looks towards semi-retirement, we thought it an appropriate moment to ask Hilary to tell us a bit more about herself and her time in education…

Having completed my Modern Languages degree, I decided to study for the teacher qualification (P.G.C.E) as I wanted to make the learning of languages for pupils an enjoyable and relevant experience.

My first teaching post started on 1st September 1979 as a French and German teacher at South Dartmoor School when the only technology used were tape recorders, cassettes, typewriters and Banda machines, as computers had not arrived in schools.

When our first son was one year old, I taught on the PGCE course for Languages at Exeter University. This was followed by a year as Research Assistant on a project at the University, the findings of which formed the basis of my MPhil Degree in Education.

Our eldest son started school at St Peter’s in 1996 and I soon appreciated the uniqueness of this school. In 2000 I started my recorder teaching at St Peter’s followed by flute tuition in 2004. I had returned to teaching languages at schools in Exeter until in 2007 I was appointed by Robert Williams to also teach languages at St Peter’s. Religious Studies (now known as Religion and Philosophy) is another subject I have taught, which has allowed me to teach the World Faiths and encourage discussion amongst the pupils about the many moral issues of life. I have loved teaching the various subjects in equal measure.

For even more variety, extra-curricular activities such as Residential visits, First Aid, Orienteering, St Peter’s Players, Flute Group and Recorder Ensemble, have all been very enjoyable. The most rewarding part of my 40-year teaching career has been the moments when pupils have understood the relevance of whatever I have been teaching.

I will not be retiring totally as I shall continue to work for our family business Bluegrass Group as Finance Director. Bluegrass has recently been awarded Pioneer of the Year for Cyber Security, which has led to invitations for my husband to lead conferences around the world. Hopefully, I will be joining my husband on his travels. There is also so much to do for my growing family as our children have partners and we have a grandson.

It will be sad leaving the amazing staff and pupils of St Peter’s. Thank you for many happy years.