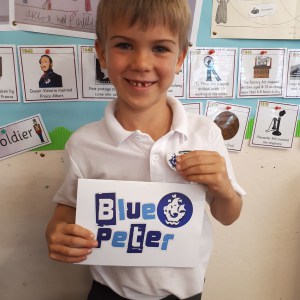 There was great excitement for George in Year 2 this week, when he returned home from school to find an envelope with his name on.  George had entered a Blue Peter competition, in which he drew a picture of Shelley the tortoise (a current Blue Peter pet) and explained why he deserved one of their coveted badges.  Blue Peter was so impressed with his artwork, and his powers of persuasion, that he was awarded his very own badge.  Well done George!